The effects of the Covid-19 pandemic are unpredictable from country to country, and even more so between the smallholder producer communities we work with across the globe. We were lucky to get some time to talk with the leaders of the two primary producer associations we work with in Colombia—Raquel Lasso of FUDAM in Nariño and Geovanny Liscano of Asorcafe in Inzá, both of whom are smallholder producers leading smallholder communities—about some of the effects they’re seeing in their communities so far. Perhaps surprisingly, not all of the changes this year has brought have been negative, but there are significant challenges and opportunities both currently operative and that lie ahead.

Colombia’s Covid-19 response and healthcare infrastructure issues offer many parallels with the US’s, and in the country at large, the disease is not and has not been well controlled by government measures.

Over the course of the pandemic, Colombia’s medical system has strained under the weight of hospitalizations. In mid-August, the country saw a massive increase in coronavirus infections, fueled by low levels of testing, inconsistent lockdowns from place to place, and hardly any contact tracing. Colombia registered the highest per capita COVID-19 death rate in the world, over Brazil and the US who came in second and third, respectively. During the first week of August, 2,139 Colombians died from Covid-19 (according to official numbers). Per capita testing levels as of August 12 were 40,000 per million, a low figure even compared to the 210,000 tests per million carried out in the United States.

Mid-July figures showed the nation’s health care system either at capacity or in a state of collapse, with ICU occupancy rates in the high 80 and 90 percentage range in much of the country. Since then, total infections have continued to skyrocket. Lockdown measures continue to be inadequate and inconsistent, as does the government assistance that would allow workers to stay home without having to worry about meeting their needs. 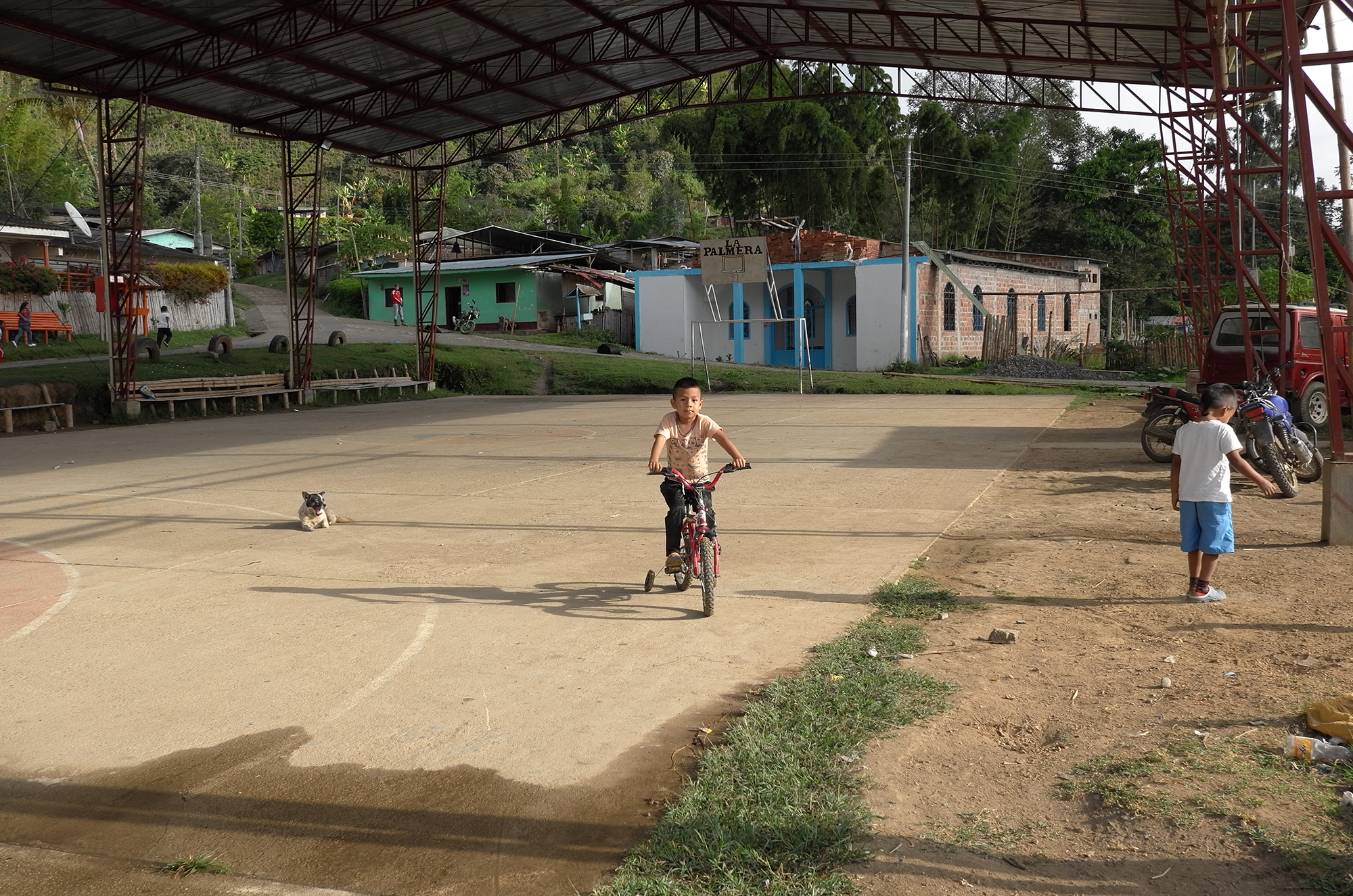 After diagnosing its first Covid-19 case in Bogotá on March 6 and watching case counts increase in major cities, Colombian authorities declared a health emergency, first suspending public events, then restricting entry from select countries, then shutting down borders beginning with the Venezuela border, where the government feared a refugee crisis was boosting case counts. Case counts continued to rise in the following days and President Iván Duque and the Ministries of Health and Education announced suspension of classes for all public and private schools and universities in the country.

By March 16, Colombia closed all land and sea borders in conjunction with the governments of Ecuador and Peru, and several departments issued curfews to avoid viral spread. On March 17 as more new cases were diagnosed, President Duque declared a State of Emergency, announcing specific isolation and economic measures to slow the spread of the virus. On the evening of March 20, he declared a 19-day nationwide quarantine, starting on March 24 and ending on April 12. Since then, Colombia’s national lockdown has been extended in some form or other eight times, through September 1, and the country has reported more than 267,300 official coronavirus cases and 9,074 deaths (which, considering ongoing struggles for adequate testing, is likely an undercount). Similarly to the US, leaders of departments, municipalities, and even specific neighborhoods have been able to tailor their own response to be more or less strict based on case counts, and many have reopened to various degrees.

We’ve always prioritized partnership with remote groups who don’t necessarily have the same market access as their more centrally-located peers, and in the case of the rural smallholders we work with in Nariño and Inzá, that remoteness has been something of a safeguard against viral transmission and offered some protection against Covid-19.

From the beginning, coffee production, milling, and exporting were deemed essential business and exempted from any lockdown orders. Initially, our milling and export partners were working at 50% capacity due to curfews forcing them to go home earlier in the evening than normal. When we talked to our supply chain partners in early April, transportation complications were reaching critical mass as availability decreased despite increased rates. Conditions deteriorated for drivers as there were no longer stops to eat and to rest. Ports were generally open for business though some had limited hours for loading and unloading. While we expected a lack of pickers would have had significant impacts on medium to large farms, the rural smallholders we work with did not feel those same impacts since the work they do involves family- and community-based support rather than migrant labor.

In terms of distancing, Inzá-based Asorcafe already had collection centers in San José, San Antonio, Pedregal and Inzá, which helped everyone keep their distance through the harvest. In Nariño, Lasso’s biggest concern in early April was retaining membership outside of La Unión where there were already instances of infection. FUDAM eventually implemented parchment collection sites in each village to keep greater distance between communities, and sometimes even collected at individual residences where members were elderly or at higher risk. 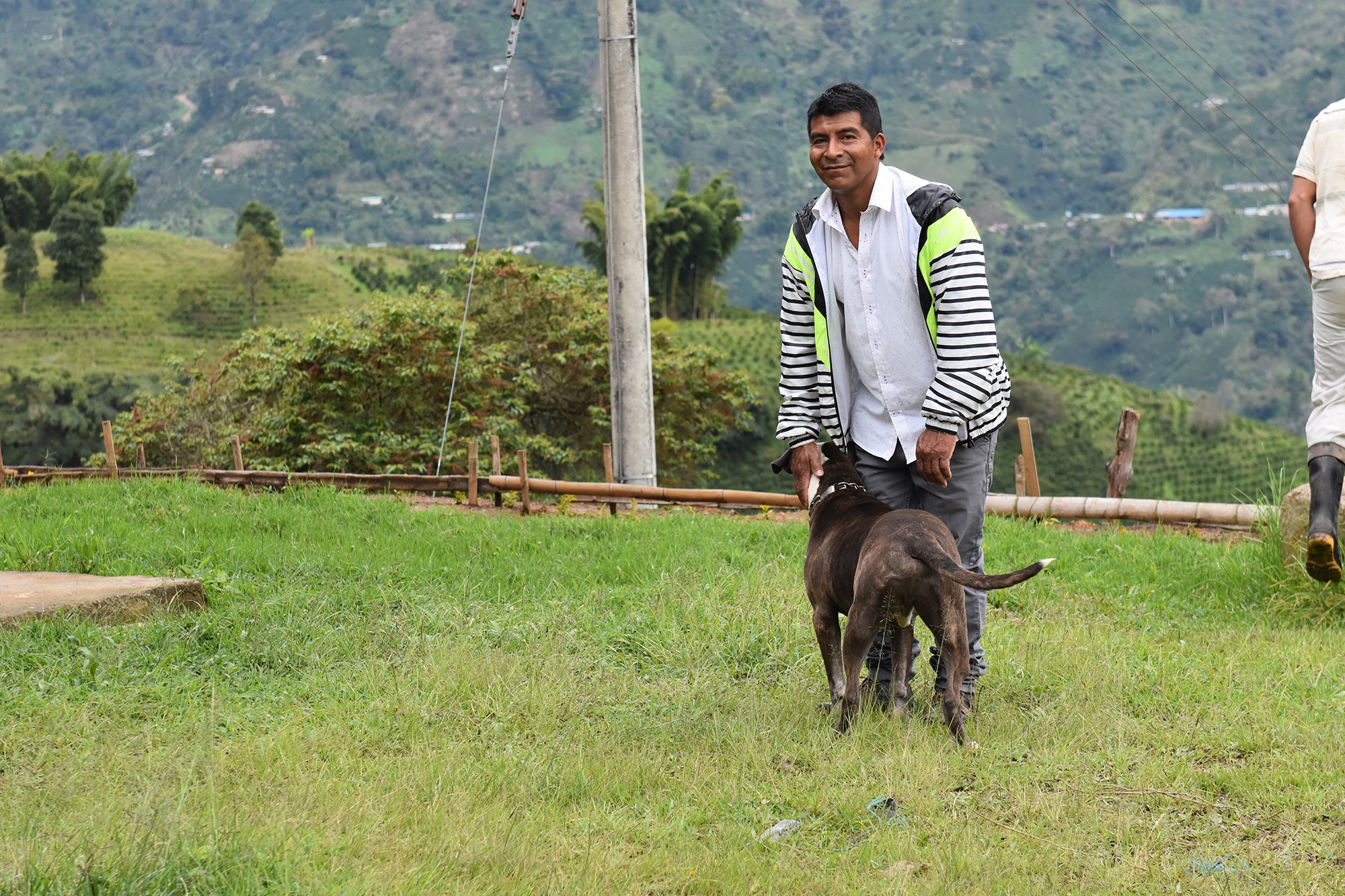 The Covid-19 pandemic has been both a physical and mental health crisis for the public, but in small rural communities that have been hit more with isolation and worry than the disease itself, the changes haven’t been entirely negative.

“In our case here in Inzá, we’re in the countryside and thankfully we’ve been privileged because it has been uniting for family and community,” says Liscano of Asorcafe. The municipality recently had its first positive case, so restrictions have tightened once again. “We’re now, once again, confined to our farm, our house, our community,” he says. “So on the one hand, we’ve been doing well, and on the other hand so so.”

For Lasso, it’s also been a cause for introspection. “This pandemic has been a moment to look within ourselves and say what have I done and what do I still have left to do?” she tells us. “This pandemic taught me that when the time comes of being faced with the end it makes you think, what am I taking away from this, and what I take away is what I did for the rest, and what I leave is the memory people have of me, so one way of not dying is to stay in the hearts of those you leave behind, to do something to remain in the hearts of everyone else.”

She also adds that the community health ramifications of Covid-19 have so far been less severe because the farms of FUDAM are diversified rather than monocropped, a priority of FUDAM’s. “We have bananas, yucca, sugar cane, there isn’t a lack of fruit or vegetables, so it was easier to feed the family. To date none of our members have had any health problems related to COVID, but it has been an effort for everyone to try to come out ahead and try to overcome this.”

But, she says, “It makes me nervous that the next time we have a meeting we have to ask which of our members are missing. That would be very painful.” 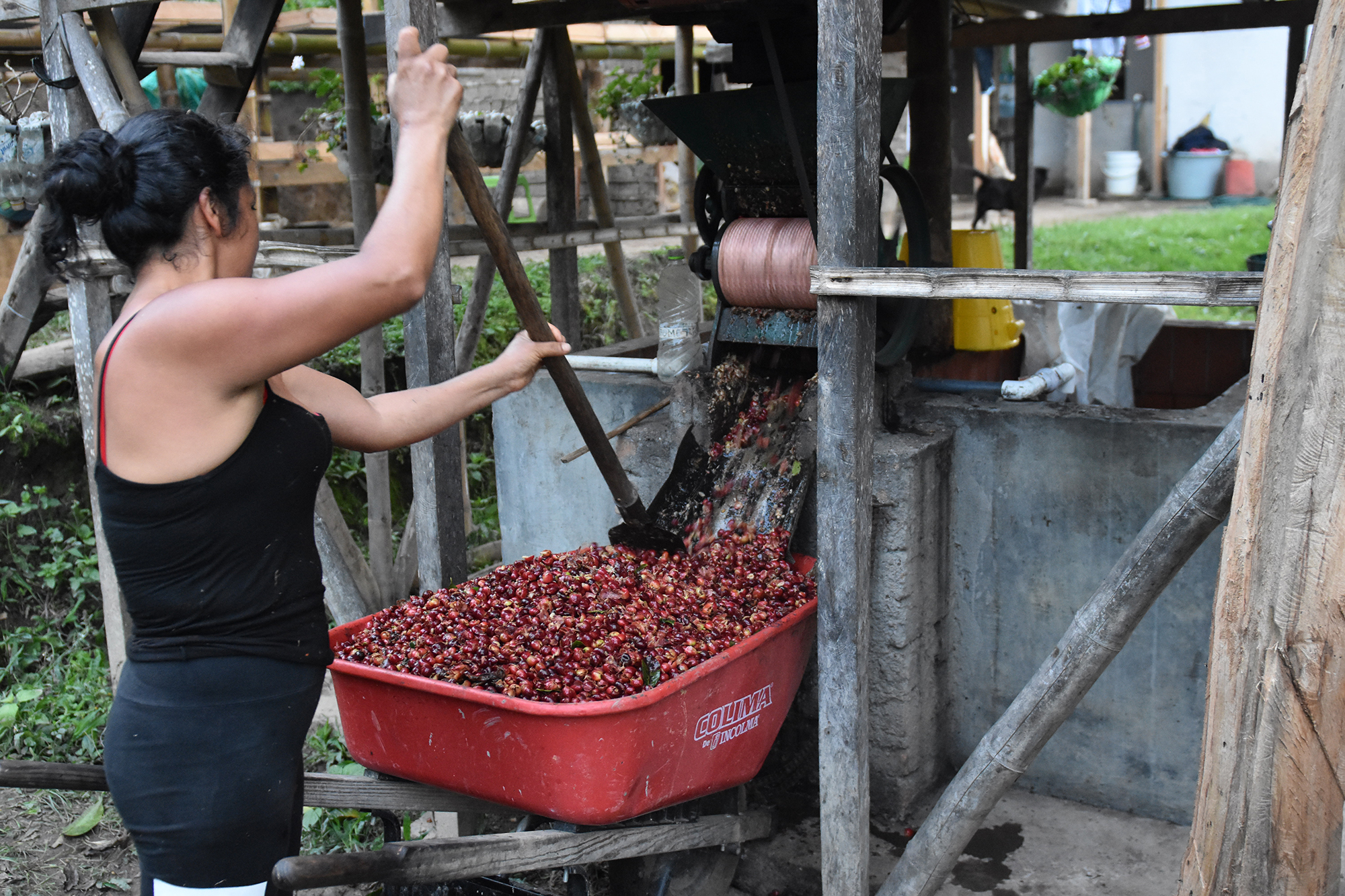 Effects on Business and Finance

While there have been some positives on the mental health side of things and a lot of luck and care in avoiding community transmission thus far, the business and financial side of things has been less positive.

While neither Asorcafe or FUDAM have had to deal with the labor shortages larger farms are likely seeing, one issue they’ve encountered is volatile and exceptionally high pricing. While, as Lasso says, this is a great thing in general for producers, it poses specific problems for small groups like Asorcafe and FUDAM, especially in uncertain times. While both of these groups pay prices well above the local market (we shared our pricing for 2019 in Paying for Coffees: Inzá and Nariño), the difficulty is in having the same amount of money to pay those higher prices upfront. So, while the local markets are still paying less than what Asorcafe or FUDAM would pay, they’re paying way more than usual and paying it on the spot.

“Right now, it’s difficult because of the high prices, the boom,” says Liscano. “At Asorcafe we have to make an investment to be able to get that coffee because the local price right now is almost as high as what we can pay, but when these booms happen—we’ve seen it before, and right now we’re seeing prices that we haven’t seen in many years—we know from experience that when we least expect it those prices will drop and we at Asorcafe still continue paying high prices.”

“For the producer it’s excellent,” says Lasso. “The producer wants to seize the moment and sell their coffee at a higher price. But it has made things difficult for us. For us as organizations collecting coffee, it’s difficult because of the lack of working capital. Higher priced coffees mean a lot of upfront investment for us. But for the producers it’s great.” She also notes that many producers in her area had replanted last year due to low prices and so this year, yields were low. “Hopefully next year there is more production, and hopefully the prices stay high,” she says.

The volatility of coffee prices is a huge challenge under any circumstances, and while higher prices are definitely a silver lining, they still present challenges for small associations who do the work of paying consistent high prices but lack working capital to pay those higher prices upfront.

The pandemic has also created logistical difficulty for these small, remote groups. “From an economic perspective the pandemic has hit us hard,” says Lasso. The complexity of collecting parchment from neighborhoods and at-risk individuals increases cost and complexity for FUDAM. “We protect each other, and if you think that by not coming here your odds are better, we’ll go to you. It increases our costs and complexity, but we’ve done it and our producers are more relaxed.”

Asorcafe has felt similar effects. “For Asorcafe economically, it has been really difficult because we have business locations and warehouses that we had to close for days in La Plata. Here in Inzá, we have also closed certain locations because it was impossible for suppliers and clients when people aren’t allowed out into town, everyone has to be in their house. On the other hand, thankfully it has helped in terms of being able to spend more time with the family and working at home.”

Liscano also notes a silver lining in being able to catch up on farm work. “We’ve been able to work on lots of things that we were behind on. There was more time for each of us to work on our farms and so it hasn’t been so bad,” he says. 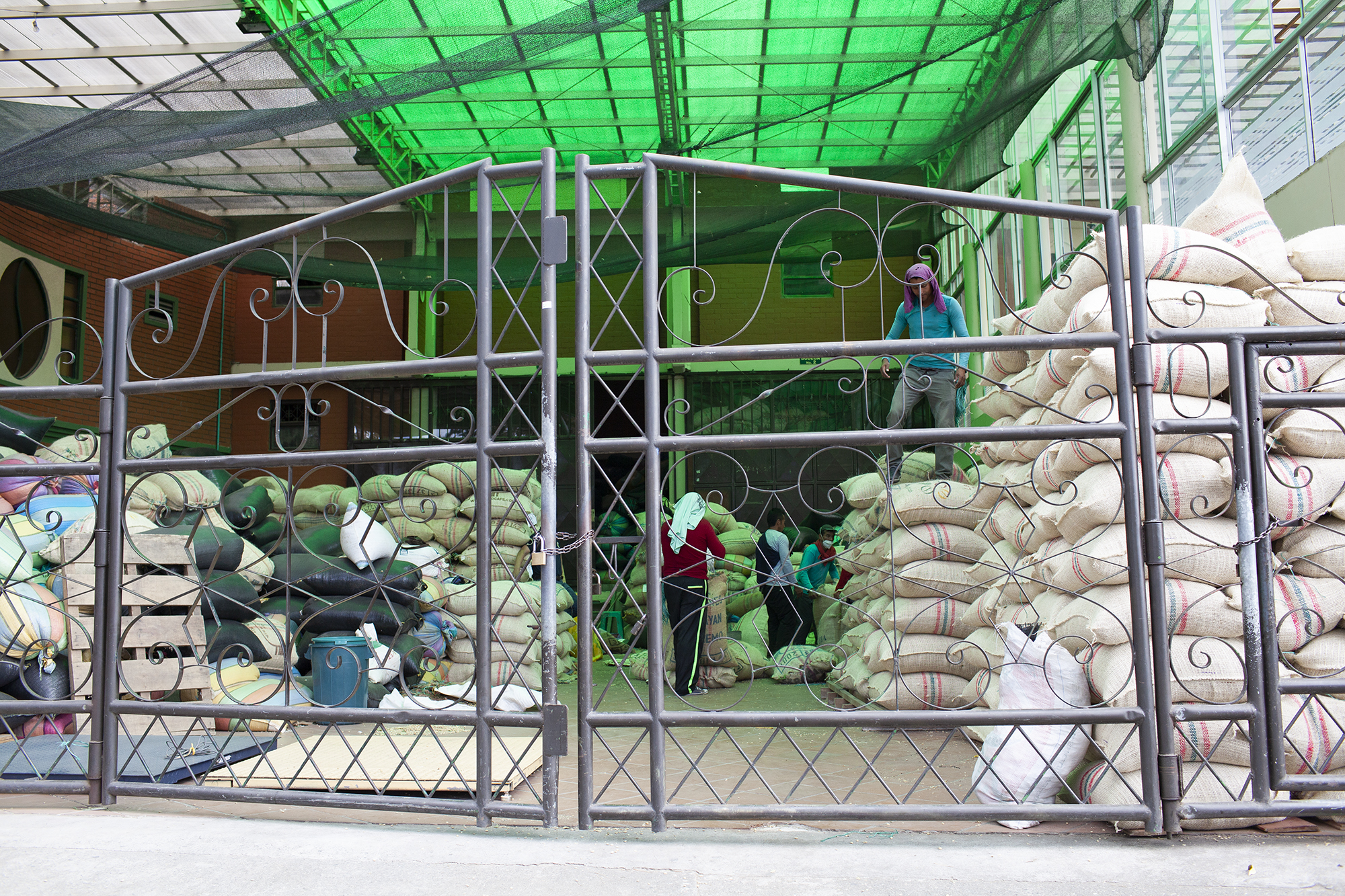 While Colombia’s national Covid-19 response hasn’t set coffee producers up for success, smallholder producers are no strangers to challenges, uncertainty, and risk. These communities have done everything in their power to put community health front and center and are continuing to produce beautiful coffee at prices that allow them to continue to invest in the community and the family.