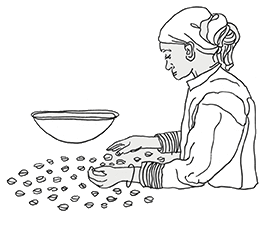 At some of Ethiopia’s most extreme altitudes lies Guji’s Uraga region, a dense, mountainous forest that spans almost a thousand miles. Within this immense forest lies an array of distinct subregions, where we source some of the most extraordinary and sought-after coffees we see anywhere in the world. Uraga coffees are profoundly nuanced with a piquant florality and a bright, complex acidity like lime and bergamot backed by stone fruit sweetness like ripe peach. When we taste Guji coffees, we look for that taste that we describe as almost scallion-like when fresh, which ripens into that unparalleled florality on arrival.

The coffees we’ve sourced in Uraga this year are already on the water. To ensure you needs are met, get in touch now to forward book. For those who book before March 15, we’re offering forward booking pricing, detailed below for the West Coast-bound lots. We’re finalizing selections for the East Coast container but pre-booking based on the pricing below. Get in touch if you’re interested.

This year, we’re even more excited about Uraga due to a new sourcing parnership with an old friend: Dagne Chomen of Welichu Wachu. Years ago, Dagne ran QC for the Oromia Cooperative Union. We connected way back then and spent a ton of time cupping together. Like many other critical supply chain partners we met through Oromia Union, Dagne moved on, worked for private exporters for a few years, then more recently opened his central washing station Welichu Wachu collecting coffee from all over Uraga’s vast forests.

Dagne himself is from Wollega, which is Oromo territory and lies closer to the Sudan border. Through his time with the Oromia Union he worked extensively in Guji, which is also Oromo territory. He has an intuitive and specific understanding of Uraga, which lies at the center of Guji, and built his centralized washing station in an area called Muda Tatesa that sources from elevations as high as 2300 masl. He’s buying coffee from all the areas we’ve known and loved in Uraga in the past, as well as some new ones: Yabitu Koba from Feku Jebril, Demicha (which means honey in Oromifa), and Muda Tetessa where the mill is located.

Dagne’s work in the dry mill is impressive: he’s a stickler for process and the coffees were perfect. He’s an experienced cupper who’s hyper-attuned the opportunities Uraga offers. These coffees will be here before you know it. To make sure your needs are met, get in touch.

On Naturals & a Sense of Place

From Aleco Chigounis, Co-Founder & CEO Naturally processed coffees, or sundried process as they’re known in Ethiopia, are enigmatic fodder for conversation in the coffee industry. Every coffee professional has…

Eden Kassahun is one of Red Fox’s most integral supply chain partners and has been since we opened in the business in 2014. Eden and Red Fox co-founder Aleco Chigounis’s…

Central Guji is one of the coffee world’s veritable treasure chests. As the Ethiopian coffee trade has made itself over several times in the past 12 years, so has Red…