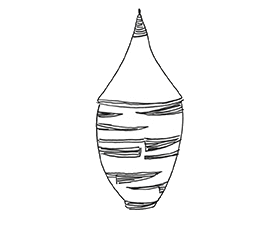 Kanzu washing station is located in the Nyamasheke district of Rwanda’s Western province. When the views are clear from the top of the ridge above the washing stations you can see all the way down to Lake Kivu to the west, which stretches the length of Rwanda’s border with the Democratic Republic of the Congo. Kanzu is a jewel of a place — organized and well-run, set against green hills of coffee, cassava, sweet potato, sugar cane, bananas, and beans at 1900 masl. Kanzu employs 50 local men and women during the harvest season. From start to finish, harvest in Rwanda runs about 4-5 months from March to July. Lots are separated by each outturn throughout the season.

After arriving at the washing station, cherry is floated and pulped, using a McKinnon disc pulper. The coffee in parchment then undergoes a dry fermentation for 16-18 hours before the remaining mucilage is washed off, followed by soaking. This typically takes up to 18 hours before the coffee is dried on raised beds with a mesh bottom, allowing for air circulation. The wastewater from the processing is treated with Effective microorganisms (EMTechnologiesTM) to secure the local water resources for the nearby community.
Very few coffee-producing countries have received the kind of focused aid that Rwanda has seen since the end of the genocide in 1994. Beginning in 2001 with the PEARL Project, and continuing with SPREAD, which ended in 2012, the Rwandese coffee industry was the focus of a series of collaborative development projects designed to rebuild the agricultural sector, mainly coffee & cassava, after the devastation of genocide & civil war. PEARL and SPREAD were funded by USAID and U.S. universities and led by Dr. Tim Schilling. By building washing stations, forming coops, and training agronomists, cuppers and quality control personnel, the programs helped to elevate Rwandese coffee to new heights, giving farmers access to specialty coffee markets and prices.

We were able to connect with Jean Bosco Seminega and Longin Muhizi of C. Dormans Rwanda in the Foxhole and talk all things Rwanda, Covid, and the 2020 and 2021…

Rwanda makes up a smaller portion of the total volume of coffee that we buy at Red Fox, but in many ways it represents best the potential for the work…

Rwandan coffees tend to be the first of our fresh-crop coffees to land in the US in the fall and, after the end-of-summer shipping lull, it’s always something to celebrate…